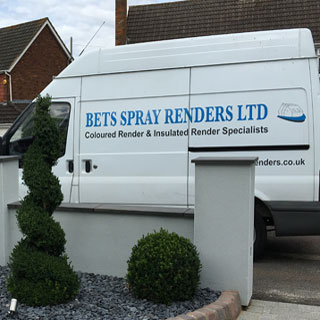 Function-
Monocouche renders are weatherproof and decorate exterior walls of buildings without affecting their ability to breathe.
Design-
Monocouche Renders are available in 40 different colours and can be finished in a variety of ways. This helps to achieve distinct architectural features such as Ashlar (lines in the render).
Versatility-
Monocouche renders are suitable for all types of buildings and most substrates, offering exciting opportunities for housing, commercial and industrial buildings in rural and urban areas.

Savings-
Reductions in labour and scaffold time plus faster completion mean that Weber, Parex range of Monocouche renders offer real cost benefits over traditional methods.
Durability-
The carefully selected colours and aggregates that make up the Monocouche renders produce a decorative finish that will mature naturally and blend with its surroundings giving years of trouble free service.
Efficiency-
Pumped and spray applied, Monocouche renders offer most highly efficient&cost effective method of rendering large & modest areas. They may also be hand applied. We are keen to have the highest level of efficiency therefore we use our “PFT G4 Light 11” rendering machine which allows us to cater for domestic work as well as our larger commercial developments.

Monorex and the other façade renders, which are manufactured in France, have the benefit of being produced using a high-quality sand (France has an abundance of this high-quality material) which has a very low clay content. Parex does not manufacture its façade renders in the UK because we believe the quality of sands available is not of a sufficiently suitable standard.

Clay content in sand has the potential of increasing the likely hood of mildew and algae attack due to its natural capacity to retain moisture, which prevents the render from drying out quickly, which may then allow dust and dirt particles to stick to the surface, which in turn allows the algae spores to take hold and this can create a green surface. Clay content in the sand may also increase the risk of cracks forming within the render itself. Poor quality sand also has iron ore deposits within it, which can also cause rust stains to form.

Parex façade renders does not generally suffer from the above conditions due to the use of high quality natural materials with added precautions, however it has to be accepted there may be certain conditions beyond a manufacturers control that may cause algae to form on the surface of the render, namely close to large trees which are covering the render from natural light or where the wall may be north facing and perhaps as an example, a tall adjacent wall is higher than the rendered wall, e.g. a retaining wall, that is blocking natural light. Another factor which is becoming more prevalent during the winter is that we are suffering warmer and much wetter winters. This unfortunately can cause conditions which allow algae and mold growth to occur and in these instances, we advise some early cleaning of the façade with a power washer.

Optional extras
We offer a product called Paraguard which is a transparent liquid specially formulated with exceptional hydrophobic properties. The product provides increased weatherproofing performance, continues to allow the building to breathe but assists in keeping the substrate dry by enhancing the rain and moisture resistance penetration. Paraguard also allows moisture inside the building to escape into the atmosphere in a controlled way.
Paraguard is ideal for providing enhanced protection to facades or surfaces that are located near the coast, situated in highly exposed locations or where the wind driven index ratings are ‘Severe’ or Very Severe’.

Maintenance & Repairs
The renders provided are regarded as “low maintenance” that does not mean NO MAINTENANCE. Often render can get dirty through circumstances beyond the control of the manufacturer. This is like having a new lawn laid and then blaming the company that did it for moss and weed growth spoiling the lawn after a single season. Therefore, if you do not carry out regular maintenance then renders can suffer aesthetical appearance problems too which only get worse if left untreated. Good maintenance practice should be followed. Should the render begin to get dirty, a light power wash sometimes with the use of detergent will generally bring the render finish back to its original condition. It is not recommended to scrub the mineral facade render as this will generally leave a “scratch” mark on the surface.
Most products when left outdoors will change colour over time given changes in temperature and exposure to ultra violet (UV) light. In general, dark render colours will fade more than light colours. This change in colour no way affects the performance of the render, but periodic re-coating using a Parex re-coating product as detailed above will keep your properties exterior in pristine condition.